This holiday season, I have quite a bit to celebrate. Woo-hoo!

Among the good news, two CP's of mine have books coming out. One CP, Kurt Dinan, recently signed with Sourcebooks. Another CP, RC Hancock's book, An Uncommon Blue came out earlier this month by Sweetwater Books. Today I'm thrilled to gush over RC and his book. 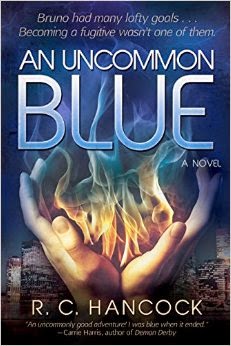 Summary:
In Télesphore, the glowing color of a person’s palm determines their place in society, and touching hands with another mixes the colors permanently. When sixteen-year-old Bruno accidentally kills a royal soldier, he goes from favored to fugitive. Now Bruno's only chance at survival is to become someone else. That means a haircut, a change of wardrobe, and most important, getting rid of his once cherished Blue. Now he’s visiting parts of town he never knew existed, and making friends with people he would've crossed the street to avoid only weeks ago. At the last minute, Bruno’s parents arrange a deal to clear his name and get his life back. All Bruno has to do is abandon those in the Red slums that look to him as a leader and let an innocent Green boy die in his place.


Why I love it:
I love this book because the protagonist, Bruno, is a hero worth rooting for. In the beginning of the book, Bruno, a member of Telesphore's social elite, enjoys his life of privilege while remaining ignorant of how those below him on Telesphore's social hierarchy are mistreated. However, after he is sucked into a scandal that jeopardizes his entire future, he immerses himself among the lower classes as a fugitive. Along the way, he is forced to make difficult choices that affect his family, his friends, and all the people who help him along the way. Through these difficult decisions, Bruno shows us all how adversity defines us. An Uncommon Blue has action, plot twists, a little romance, and a theme that all of us can identify with.

Plus I love the cover...I'm such a sucker for a good cover. And, of course, I'm incredibly partial because I adore RC. 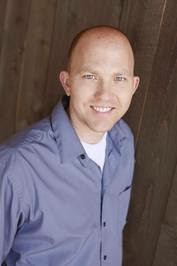 About the author:
RC (Really Cool) Hancock began his writing career with a story about a dead cat which his second grade teacher thought was brilliant. Convincing others of his literary genius has taken longer than expected, but along the road he has acquired a lovely wife, four entertaining ankle-biters (who, thankfully, look more like their mother), and a degree from BYU in Recreational Management & Youth Leadership (which means he’s really good at having fun.) An Uncommon Blue is his first novel.

Posted by Kimberly Gabriel at 3:00 AM 5 comments: