To enter my giveaway for a signed copy of Veronica Roth's INSURGENT or Liz Norris's UNRAVELING, go here. 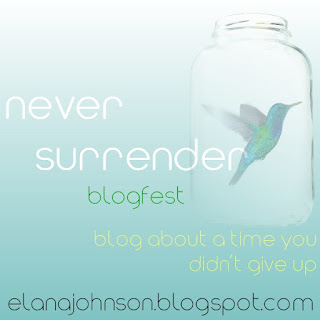 During the second week of June--that's the 11-16--Elana Johnson is hosting the Never Surrender blogfest. This is something anyone, anywhere can participate in.


In Elana's words...All you have to do is blog about a time you didn't surrender. Trained for a marathon? Queried agents? Had to study for an entrance exam? I'm looking for inspirational stories that you have experienced. Hard things you've accomplished because you didn't give up. I want to be inspired by you!

Don’t blog? Put the cover of Surrender up on your FB wall, or pin it on Pinterest, or change your twitter avatar to the cover. Use the words “Never Surrender” somewhere to go with the picture, and link back to this post.

Sign up in this form to make sure you get the swag package. Elana will visit each blog to read your inspirational "never surrender" moments.


I debated writing about running my first marathon, writing the book I’d always talked about writing, and teaching seventh grade English for 12 years – talk about needing a never surrender mentality! But as I sit in the waiting room while my two-year-old son undergoes his fourth surgery (thankfully not life threatening), I can’t help but see all of those as practice tests.

My elation over becoming pregnant after eighteen months of trying quickly turned to anxiety when I was labeled a high-risk pregnancy during my first trimester. For a series of potential complications, I was heavily monitored until I went into labor at 32 weeks. Though doctors stopped the labor, my son’s fetal heart rate bottomed out. On February 5, 2010, I was rushed to the OR for an emergency c-section in a very dramatic flourish – one perfectly scripted for primetime TV complete with a tray full of scalpels crashing to the floor just before they knocked me out. Our amazing team of doctors saved my son’s life that night, and he was born at 4lbs 1oz.

I saw my firstborn briefly when I woke up. They wheeled me into the NICU where I was able to touch his hand. When he grasped my finger, it was the most beautiful moment in the world. I couldn’t hold him. I couldn’t stay with him. I could barely tell what he looked like with the tubes and braces supporting him. But he was safe, alive, and though tiny, pretty damn precious.

Once again, our relief was short-lived. The following night, his lung collapsed. NICU doctors acted quickly and saved his life for the second time in 48 hours.

He spent the next 5 weeks in the NICU where I visited him every day, twice a day. Our experiences as first time parents were atypical. Instead of holding my child, I was allowed to cup his head and his feet with my hands. Instead of fussing over a crying newborn that wouldn’t sleep throughout the night, we toiled over the guilt and worry of leaving him every evening in a room filled with monitors that beeped all night long. Each family moment was shared with nurses, doctors, and other NICU parents. For being a private person, nothing for us was private.

The NICU is a wonderful, magical place that saves babies’ lives and parents’ sanity. But not every story there is a happy one. When we took our son home for the first night five weeks after his birth, I sobbed hysterically that we were so lucky.

Shortly after his homecoming, my son developed severe reflux and Preemie Chronic Lung Disease. With an already weak immune system, we found ourselves in and out of the hospital – seven times in eight months. His premature birth coupled with chronic sicknesses led to developmental delays. We saw four different therapists on a weekly basis to help him catch up. Our lives were chaotic. Everything we did surrounded strengthening ad protecting our little boy. And, yet, somehow, someway we managed to raise a happy kid who loves – more than anything – to laugh.

One of my proudest moments as a mom was in the recovery room after his second surgery. An hour or so after he’d woken up, my husband, my son and I were having a dance party. My husband and I were dancing like complete idiots while my son sat in a hospital bed groggily flapping his arms. The nurse came in to check his vitals. Before she left, she told us that she rarely saw chronically sick kids like our son as happy and energetic as he.

I can’t help but think this is because my husband and I never surrendered. We never surrendered to pessimism. We never surrendered to the “Woe is me” mentality. While there were plenty of tears and scares along the way, we focused on recognizing how blessed we were to be a family. Our road may have been tiring, emotional, stressful, and, at times, heart-wrenching, but we were hell-bent on surrounding our kid with happiness, love, and dance parties.

I'm 31 weeks pregnant now with Baby Boy #2. I found out I was pregnant two weeks after doctors told me I had a less than 10% chance of having a second child - another story for another time. This pregnancy is once again high risk. And if he does come early, and we have to take the same path we took with our first son to have another happy, thriving kid like him, sign me up. Bring it on. We'd be a very, lucky family. 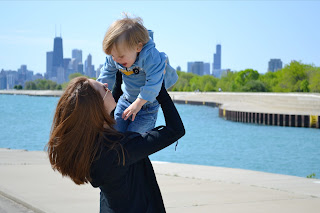 Posted by Kimberly Gabriel at 6:07 PM