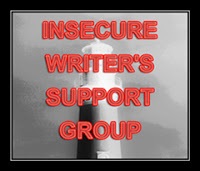 Why is it so hard to believe the good stuff? I never do - NEVER - not when it comes to writing. If a CP writes a positive note, I think, "That was very sweet of her to say." If a CP writes something negative, I immediately jump to the conclusion that I'm the world's worst writer and should quit now before I waste years of my life chasing a pipe dream I'll never reach. This is immediately followed by many glasses of wine and days of moping until I get around to slowly building myself up again realizing that I'm not the WORLD'S worst writer - that's silly. Surely someone out there sucks more than I do.

It's almost worse if that comment is constructive or makes a really good point. If I actually agree with a CP's negative comment, then it's so much harder to write her off as a jerk who feels inferior by my stellar writing skills and only wants to rip me apart to make herself feel better...OR (an even better excuse)...He's just an idiot who just doesn't get me, my writing, my characters and how much time I spent perfecting the scene he's riping apart. (Just to be clear - aka in case they are reading this post - I actually LOVE my CPs and Betas to death - especially when they rip me apart).

Is anyone actually able to wallow in all of the positive feedback and not feel totally crushed when they hear something negative? If so, what's your secret?
Posted by Kimberly Gabriel at 8:59 AM